One day my youngest son begged me to let him join this Martial Arts that was in the same shopping center that I shopped in. Every time I ran to the store I had to hear him “mom! Please! Can’t we just go look?” I thought to myself it probably will cost me an arm and a leg. I did the baseball thing with my other children. What a rip off that was! I had to pay for signing up,uniform,bats and gloves to also find out we had to pay for the trophies as well. They don’t get them by earning them. Win or loose they get it. That don’t teach them if you want it than work for it. It taught them no matter how I perform I get a trophy. Omg! The parents acted like they are the ones that played the game. They would push their kids like dogs tied to a sled. It was a sad sight to see.

After two months of listening to this son of mine I gave in. What would it hurt to let him go look. I asked his grandfather to take him over to see while I shopped. I heard all about it all the way home. I never seen such a desire for something like this in a child is the only thing I can say to describe what I was dealing with.

So I made a decision to check it out and see what all this fuss was about. I listened to hear that martial arts was a self defense . To protect oneself from danger that could come from another. So this was not something you send your child to ,to teach how to become a bully; but the opposite. I noticed there was a lot of physical excercises and activities to benefit ones health. I finally had my two sons signed up. For me I was not looking for no belt ranks but the physical side since I was homeschooling. Now don’t get me wrong my kids were very fit not some fat kids on an Xbox. They love to be outside. They are very active. But I seen that there were something’s that active kids still had a little difficulty with. Like squats and pull ups. Today my kids can kick over my head and do splits.

Later on I also decided to let my daughter join. Best decision that I ever made. Not only can she kick over your head as well; but she is fit and I never have to worry as a mother that any guy will mistreat her. It makes her feel confident about herself and her value. I am writing this because Martial Arts is so much more than you think. It teaches so much more than body activities. It teaches time management and character. Self- discipline and self-control. Things that our young people will need when entering the adult world and the workplace. Cleanliness and manors. Respect and honor. Things they don’t teach in many schools or homes today.

In a class you will see them partner up with someone and think nothing about it. But you must look deeper into what is really there. Yes they are working on getting things down to be able to defend automatically. Think about what this really takes on. Partners must have trust in each other and at the same time know that things can change at anytime. Sounds kinda weird don’t it? Let me explain. Each person is at a different skill level. So they must trust each other not to purposely hurt each other when that ability is definitely there. And always be on the guard and awareness of their surroundings to defend against an accident or mistake. If the partner throws a punch at another partner even though his partner knows he is not really going to hit him this can change unknowingly if his partner swings to fast and he is not ready. Things like this can happen to a child from a family member that a child trusts. And you know what I am talking about. It happens!

They are taught to think ahead  to know the pros and cons of a situation. Ready for both at all times. That is a great quality to have in life. It’s not having a plan B ; it is knowing and having plan A through z. Haha. They are taught to defend against someone choking you ,guns and knife attacks. That’s a big one in today’s world. 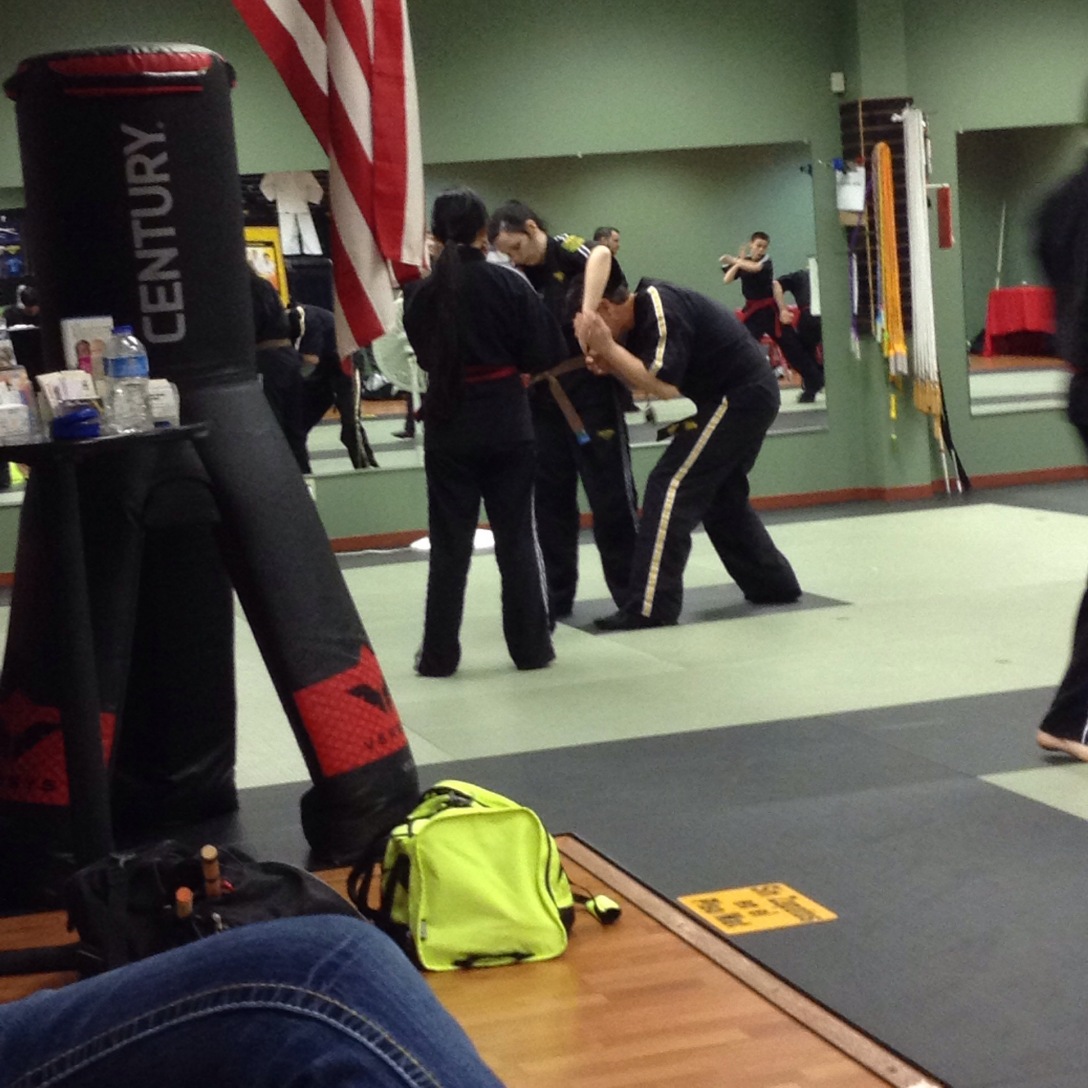 Watch a video of their elbow strikes right here Yes you pay for the uniforms and the weapons. You pay for the belt test but you do not get a belt unless you mastered the skill needed for that rank. It teaches them to go after something with their hearts and never to quit or say I can’t do it. Those words are not in their vocabulary or mindsets.

Today my boys have earned their third degree red belts. First degree black belts are what they are working for now. My daughter who started later is second degree brown working towards her red.

I am so proud of how much they learned,how hard they have worked and how much they have accomplished on their own. Don’t look down or by martial Arts like it is just another sport. It is NOT and so much more.